Europe yeast extract industry: 3 prominent applications to look out for

Europe yeast extract market share has been growing with an appreciable pace over the past few years. Natural food additives have seen an increase in demand from the food and beverage sector in recent years, with changing dietary tastes and healthy lifestyle adoption among Europe's younger population. The recent COVID-19 pandemic has further accelerated consumer awareness about plant-based ingredients that offer higher immunity to the body. As per a recent consumer study in Europe, nearly a quarter of the population in the region have been actively reducing their meat intake.

Supermarket chain Veganz examined the changing attitudes of over 2,600 shoppers across Austria, Germany, Switzerland, France, Belgium, Portugal, and Denmark. The 2020 study revealed that, the number of vegans in Europe has gone up from 1.3 million to over 2.6 million through the past 4 years.

Have a look at the top three applications driving Europe yeast extract industry forecast over the coming years. 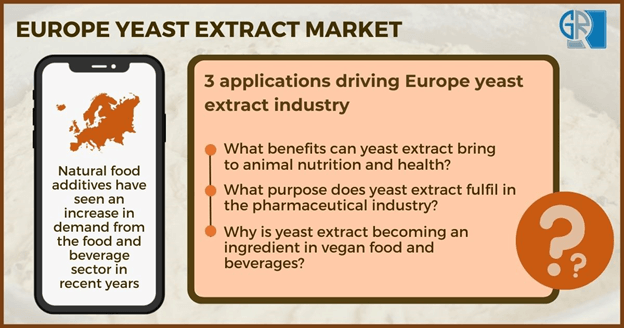 What benefits can yeast extract bring to animal nutrition and health?

What purpose does yeast extract fulfil in the pharmaceutical industry?

Apart from being widely used in the animal feed production, yeast extract finds extensive use in the pharmaceutical industry as well. This is due to the fact that yeasts such as non-saccharomyces are employed in the production of enzymes and medicinal proteins. These components contain vitamins that are essential for human health.

The U.K. is counted as one of the notable pharma markets in Europe, with flagship British pharma manufacturers such as GSK and AstraZeneca. Acting upon the growing threat of infectious and chronic illnesses, the country is increasingly recognizing pharmaceutical production as an important sector of the economy. It will offer key opportunities for ingredient suppliers, such as yeast-based compound producers.

Why is yeast extract becoming an ingredient in vegan food and beverages?

The vegan population is growing at a promising pace worldwide. As per the registered educational charity Vegan Society, there were approximately 600,000 vegans in the U.K. Yeast extract, having a natural savory, umami flavor, is becoming increasingly popular in a number of vegan dishes worldwide.

It may be used to season sauces, bouillons, soups, savory snacks, and many other dishes to bring out flavors in food. These ingredients are used to compensate the loss of saltiness that happens when the salt level of a dish is lowered, making it the ideal companion for low salt cooking.

The COVID-19 pandemic pushed people to stock up on ready-to-eat snacks, while avoiding social interaction. This notable change in customer buying behavior considerably increased yeast extract sales as a crucial component used in shelf-stable food. Over the next few years, growing percentage of working women, rising number of households with kids, and busy schedules, will ensure that these ingredients gain widespread recognition.