An insight into Europe solar panel cleaning market outlook: Robotic technologies to be at the forefront

Europe solar panel cleaning market promises strong ROI through the coming years. The growing preference for renewable energy, along with favorable government legislation, has sped the implementation of solar energy farms across the U.K., Spain, Italy, and Germany. Because these farms are generally located in distant and remote places, they are frequently subjected to dust and sandstorms. This has resulted in the installation of solar panel cleaning devices, to maintain constant energy outputs and increase product dependability. 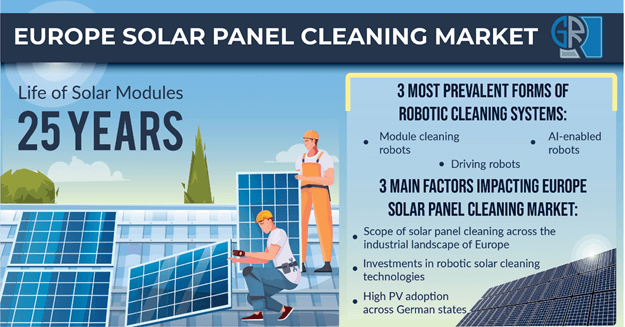 Scope of solar panel cleaning across the industrial landscape of Europe

In comparison with other energy sources, solar energy offers a better and greener energy future. However, dirt, dust, mud, and bird droppings can impair the efficiency of solar panels, reducing electricity production. According to studies, unclean glass on solar panels can reduce efficiency by 20%-40%. In order to unlock full scope of solar technology, the use of robotic cleaning solutions is gradually gaining traction across large scale industrial operations.

Project managers are trying to maintain maximum production when running large-scale solar parks. However, getting the most out of a large-scale solar power plant is becoming increasingly difficult in harsh and dry locations. One of the most significant barriers to solar energy generation is soiling, accounting for up to 35% of panel outage. As a result, companies are looking at solar panel cleaning options with renewed interest.

Automation is steadily penetrating the solar energy industry, after first appearing in a variety of industrial landscapes. The life of solar modules is typically guaranteed for 25 years, and cleaning is crucial for effective power generation, which has an influence on the bottom line. Several robotic technologies have reached the market, providing a more cost-effective technique of cleaning solar panels than hand cleaning.

Drones and robots are enabling for more efficient and effective solar panel cleaning operations, optimizing the performance and power output of PV panels while also lowering labor expenses. Module cleaning robots, driving robots, and AI-enabled robots are some of the most prevalent forms of robotic cleaning systems.

Another new technology that will affect the future is the integration of thermal imaging cameras with robotic cleaners, which allows plant owners to identify and repair any hotspots that may emerge on their modules. Government laws aimed at limiting the use of labor in severe, high-temperature situations may produce new revenue options in the autonomous solar panel cleaning market.

Germany recently announced a solar sector acceleration package. The country is on track to become one of the largest PV market in Europe, according to the newly appointed German government's objective of reaching 200 gigatons (GW) of installed PV capacity by 2030. Federal policies aimed at lowering reliance on fossil-fuel-based power generation, particularly to minimize carbon footprints and harmful emissions, is likely to power solar panel cleaning services across the region.

In addition to that, increased attention on power conversion efficiency in solar facilities is likely to spur affordable and efficient solar panel cleaning services uptake. Adoption of principles such as decentralization, decoupling, decarbonization, and distributed generation may drive solar PV installation, boosting product demand on a broader scale in residential as well as in commercial applications.